Day 3 Yes, They go to School

I never thought I would really have to answer that question. I mean, really? It is 2015. I am sure you have seen the little school buses that are for children with disabilities, you know the one, and you know what you call it...That bus isnt just for kids in wheelchairs or walkers or whatever notion you might have in your head. And Im fairly certain that Kai might one day be able to ride the regular school bus. Shocking, I know. But for now he still needs the 5 point harness, so that is where he rides.

But yeah. I cant tell you how many times I have really been asked that.

Does he(they) go to school?

Noooooo...he(they) go to the same public elementary as my daughter.

Yeah, its great. It's kind of the law. They can go pretty much anywhere your kid can go as a person. I thought all people knew this. I thought maybe people would know they attend public school but not realize that they had infiltrated into their kid's classroom. That I could more understand. Maybe because their kid doesnt come home talking about them, which to me shows progression. He is just another kid in their class.

They do spend different amounts of time in their Gen Ed class, as to be expected. Peter attends Gen Ed for specials, which are Library, PE, and Music, and he also attends art with them. Peter is still too disruptive to be in a general education classroom. It has little to nothing to do with how far behind he is academically. If he could sit quietly in a desk, he could probably go in a little more often for peer to peer interaction and exposure to educational material they are learning. But he would still spend most of his day in Life Skills(the special education classroom. Some places Life Skills and Special education classroom are 2 different things. Here, they are one in the same) with his awesome teacher and his awesome aides. Peter's 2nd grade teacher is pretty awesome and they have invited Peter down several times to the classroom this year already. He went for his All About Me bag I sent. The kids got to learn he was from Ukraine and that we adopted him. They learned about his heart and his heart surgery. They learned that we chose Peter because he has Down syndrome, that we wanted him. The teachers feel it is an important thing for the students to know, and so do I. They also invited him down to have applesauce when they made some in class. He had a great time! Most of his visits will be social/group activities in nature. That is what is appropriate for Peter at this time.

Peter and his Applesauce 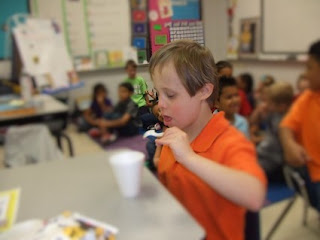 Kai spends roughly half of his day in his Kindergarten Gen Ed classroom. He goes in for Calendar, snack time, Recess, Social Studies and Science, Reading, some Math and for Specials(PE, Music, Library) and Art. The rest of the time he spends in Life Skills. Life Skills is where he gets his academics taught to him, Reading, Writing, and Math, his therapies(Speech) and actual Life Skills like potty training(which we are doing awesome with! Thank you Ms Ruth), brushing teeth, washing hands, etc. This is what is appropriate for Kai at this time. I trust our team. They work well with us and have never denied me any request I have had for the boys. Of course, I dont go in asking for the ridiculous. Im not out to prove something by forcing full inclusion on both of them. It isnt appropriate for either one of them. I think eventually Kai will have full inclusion and that Peter will have more time in Gen Ed and actually learn academics. Slow and steady.

But yes, they do attend school. A regular school. They do school work. They get grades. They are walking out and about in the school. Other kids know them and love them and say Hi! and give High Fives and Fist Bumps.

Kai and the Lu at the FunRun 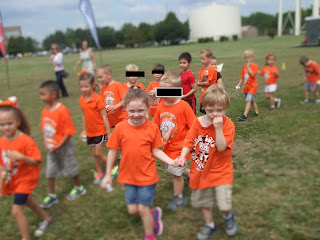 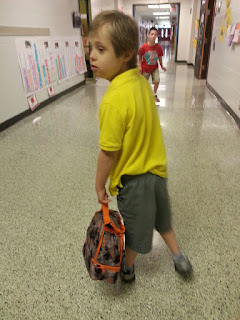 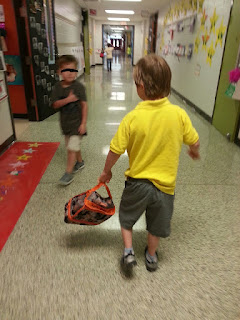 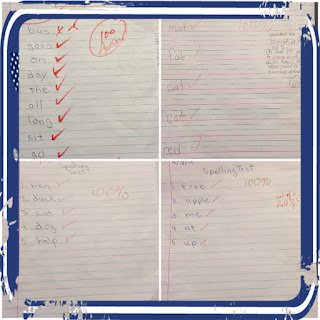 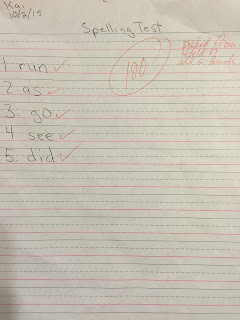