Updated pictures of Kai after SJS

Many people have asked how Kai is. Kai is super. Kai is great. Kai is my hero. How that little boy went through what he did and looks as beautiful as the day I first laid eyes on him is nothing short of a miracle. He has NO scarring. He has NO vision loss. He has NO scarred over sweat pores. He has NO photo sensitivity to light. No dry eyes. No permanent lung damage. He is simply amazing.

I have received many questions about SJS, Stevens Johnson Syndrome and TENs, Toxic Epidermal Necrolysis...I am not a DR. I can only give you my experience and tell you our story. That is why I posted the pictures of the progression of the rash. If you even suspect that your child may have this, take them to a physician immediately. Kai's airway closed up within 36 hours requiring a breathing tube and ventilatory support for 9 days.

So enough rehashing that terrible illness and more on his miraculous recovery. We were told that every day spent in bed would take 5 days to regain his strength. He was in bed for nearly 3 weeks or more. 2 of those weeks completely sedated and paralyzed with drugs and being fed with TPN and lipids because even his gut motility had stopped. He lost so much weight his diapers leaked at the leg elastic. So, 3 weeks in bed times 5 days to recover for each day, 15 more days?! We came home on Ativan and Methadone because he was on so many pain drugs that we finished the weaning process at home. Who ever dreams of giving their 3 year old Methadone? The first day home he was very very angry that he could not even stand up. Not only did he have being in bed for that long against him, he also has Down syndrome that lends to lower muscle tone and loose joints to begin with...

It was very difficult to watch him become so frustrated and cry because he could not even stand up. This is a little boy that goes from the moment he gets up until he goes to bed, no nap included. He is also a very determined little boy. The second day he managed to stand up for about 10 seconds before tumbling down on his rear. This also pissed him off.  So he decided on another tactic. He spent the entire 2nd day at home cruising the couch. He would go back and forth. Then he ventured a little further. He took two steps from the couch to the ottoman! He was so excited and proud of himself. Of course he then assumed he could just take off from there. Wrong. Again, pissed off.

So, then he went to the farthest end of the ottoman and walked as many steps as he could, over and over until he finally reached the edge of the couch. I would say that is about 8 or so steps. Second day out of the hospital, a month stay in the hospital. So he did that all day. Then he practiced standing from sitting in the middle of the floor. He did all of this on his own, no prompting or help from us. I was sure he would be walking within a week or two!

The third day we got up, did our daily morning routine and he was at it again. Around noon I noticed that I didn't see Kai anywhere. I was instantly panicked! What if he fell and hit his head. What if he was having a seizure from withdrawals...what if, what if, what if?! I couldn't find him anywhere downstairs.

Then I heard a slight thump above my head. Surely not. But the other two kids where right there with me. I raced up the stairs and there HE was....in the middle of his bedroom playing. He climbed the entire flight of stairs all by himself and was going from room to room upstairs playing. He was happy as a lark.

So, yet again, my son with Down syndrome taught me another lesson. If you want something bad enough you can achieve it, and you can achieve it on your own with perseverance. And NO Whining. That extra chromosome really is something more special than any of us realize. Survival of the fittest...

So, enough of the story. I will now post some pictures of what Kai looks like today. He went into the hospital June 9th, 2012 and came home July 2nd, 2012. I would also like to once again thank each and every person who contributed in any way, from prayer, to cards, to meals, so so much....I can never ever thank you enough but know my gratitude is endless..

So without further ado:

This was the day we came home July 2nd 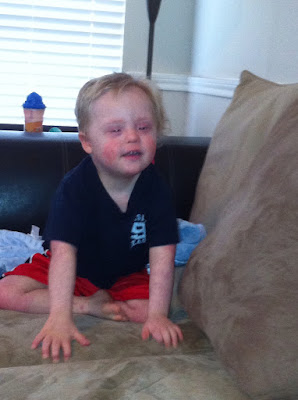 These next 3 photos were a week or two after we were home when my Best Friend Christie came all the way from Indiana to meet us and our very very good friend Anna drove from Austin to spend the day with us. 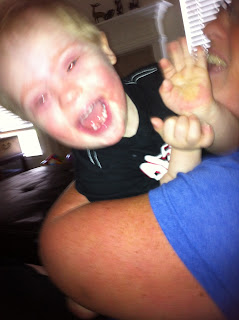 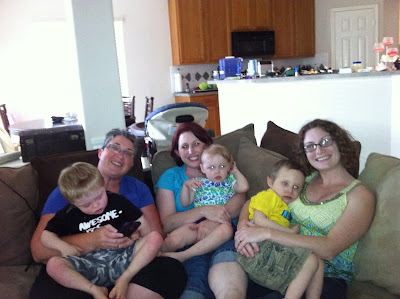 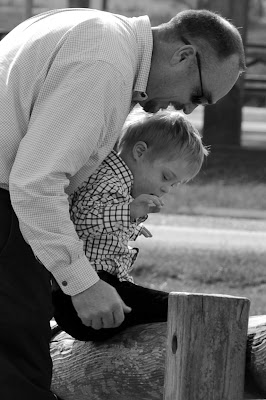 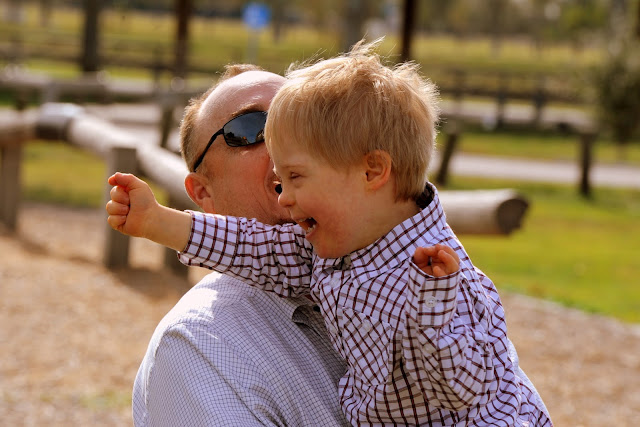 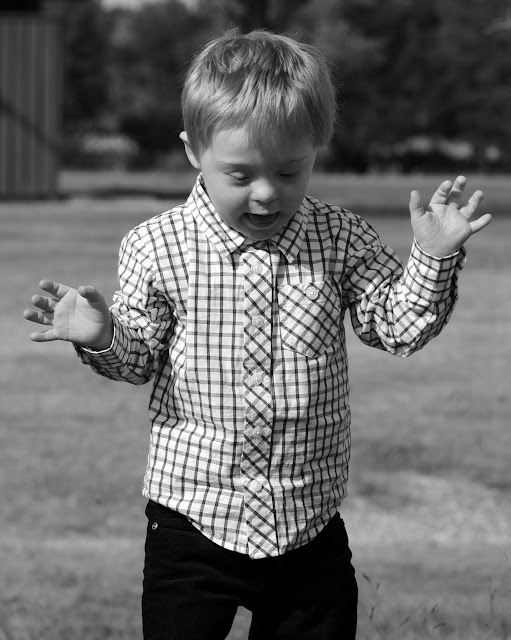 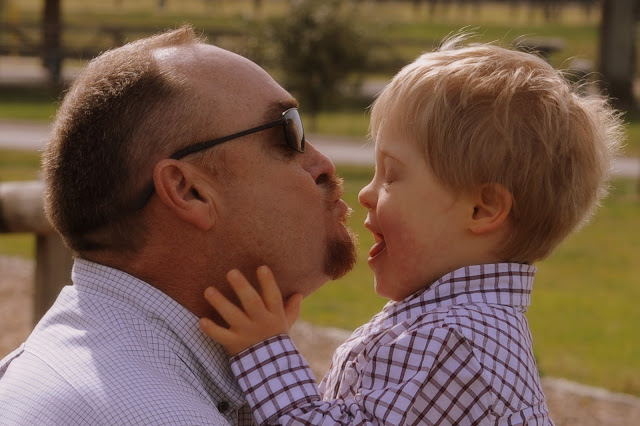 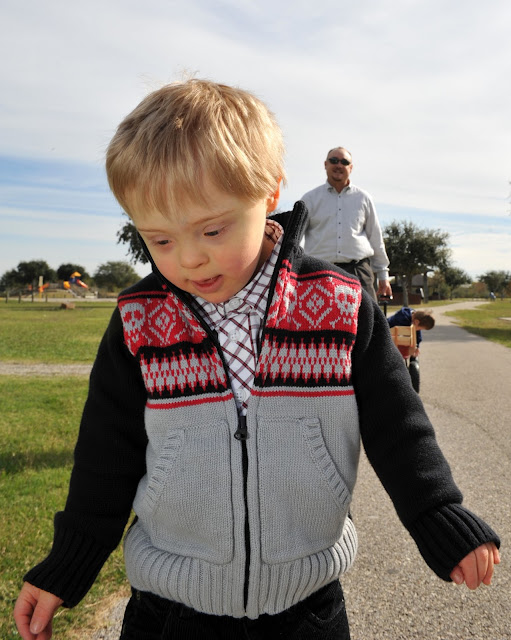 Here Kai is pushing his brother, Peter, and Lu is helping pull the wagon 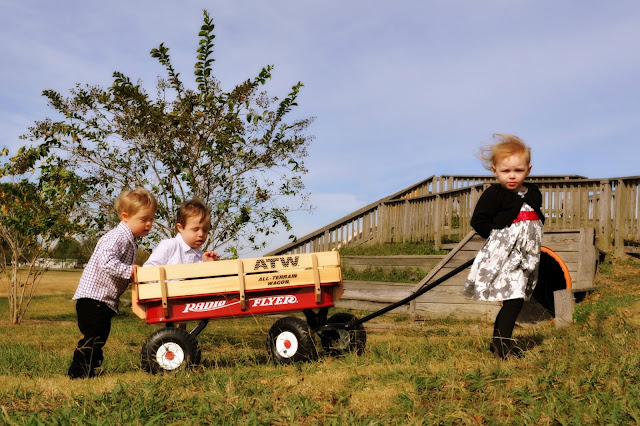 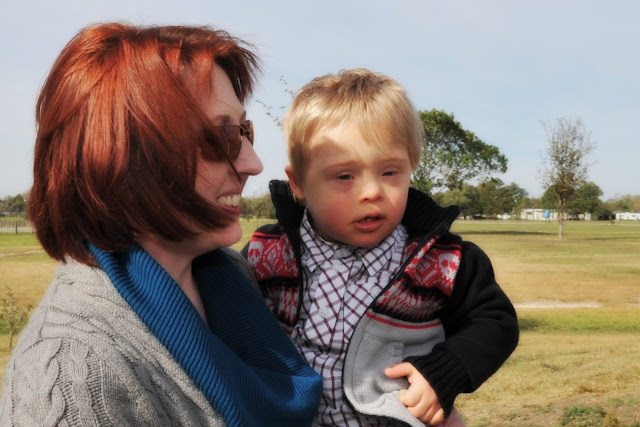 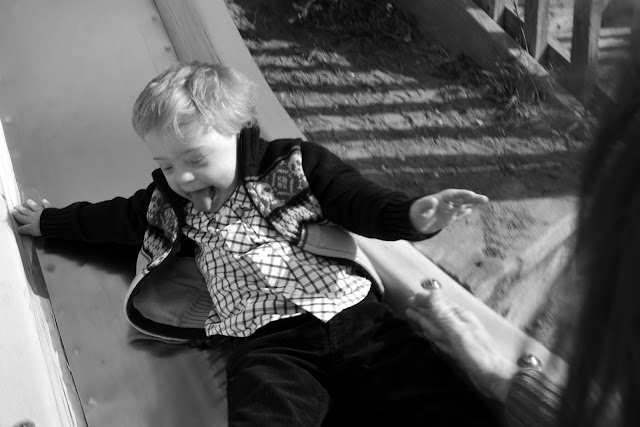 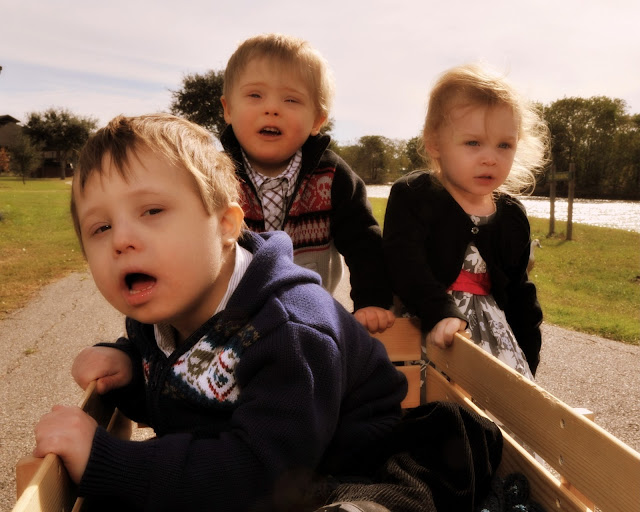 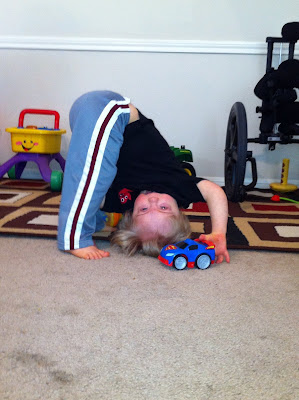 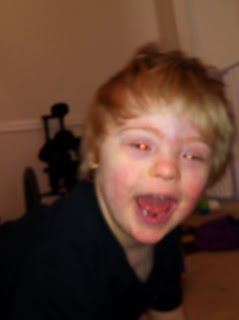 Telling Santa ALL about it... 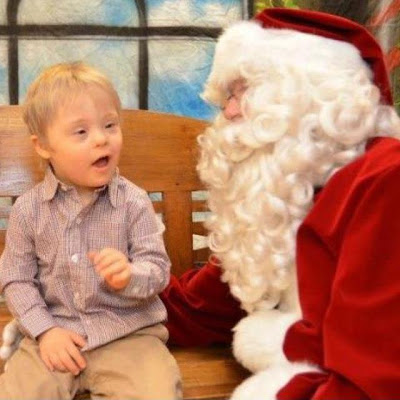 So there you have it. My boy is a miracle. My boy is beautiful. Even if he did have scars, he would still be beautiful...because he has a heart of gold(I asked the surgeon to put some in there when he did his heart surgery at 10 weeks old!).